2015 is almost over? Wow, this year has flown by, probably because we’ve been so busy. As the cannabis industry continues to flourish in fledgling recreational states, legislators and voters, too have been quite busy growing the movement across the country.

This year saw the kickoff of several new markets, and wheels turn in states that were caught up in regulation writing for some time. We also saw encouraging and sometimes surprising progress in states that weren’t even on the radar last year. We’ve provided a snapshot at some of the exciting highlights in cannabis reform from this past year and a look ahead at 2016. 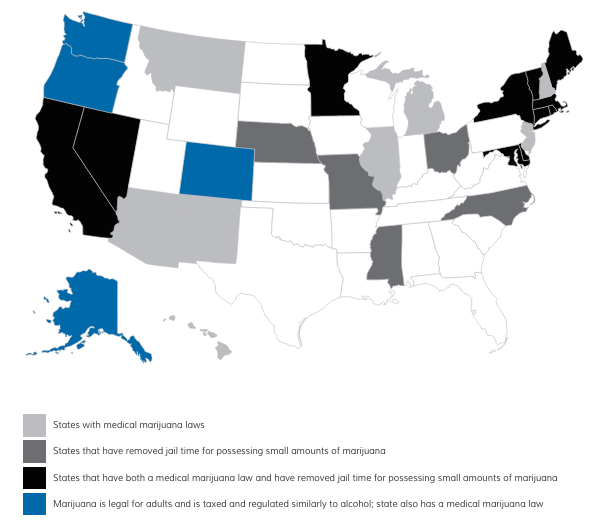 In November, 2014, Oregon became the third state to legalize recreational cannabis! Less than a year after the ballot initiative the state has swiftly organized their recreational program and stores opened for sale October 1st. The Oregon Liquor Control Board, who is responsible for implementation and regulation has provided a four month tax holiday for consumers to become familiar with the program. After the grace period a 25% tax will be applied to purchases. Senate Minority Leader Ted Ferrioli, R-John Day, championed a quick start to the dispensary program to discourage black market activity in the newly legal marketplace. With the quick start customers can purchase up to seven grams per visit. Edibles are legal under the law, but will remain off shelves recreationally until regulations on packaging, labeling, and dosing are finalized early 2016.

In a heartbreaking 2% miss of a supermajority last November, Florida licked its wounds and legislators acted fast and were able to turn that momentum into cannabis reform. Medical ‘Low-THC cannabis’ was legalized for sale in 2014 and applications are now currently being reviewed. The aim of this program is to give medical cannabis patients safe access to CBD, the non-psychoactive and arguably more medicinal cannabinoid. CBD therapies are available and legal on the national market, but the provision that they be derived from imported hemp makes these dietary supplements expensive and less regulated. Under a state legalization bill, doctors will be able to prescribe dosing for patients with qualifying conditions leading to better and more responsible care. The hope is this introduction of low-THC cannabis will coax another 2% to help pass a more comprehensive cannabis bill next time.

One of the most interesting stories this year comes surprisingly from the rust belt. From pretty average cannabis grassroots came a full legalization bill that has secured signatures and is up for popular vote next month! Ohioans will be voting on Amendment 3, which will legalize medical and recreational taxable cannabis sales. Ten growing licenses will supply an open dispensary market. Get excited east coast, legal cannabis may be just a daytrip away.

Alongside Oregon, Alaska also legalized recreational cannabis last election. Alaska’s Marijuana Control Board is expected to finalize the industry regulatory structure in November, with plans for their local market to open during the spring of 2016. Who’s up for stoned whale watching?? (Just for the record – You are stoned, not the whales.)

Maryland made great headway in 2015. They updated rules in their 2013 MMJ Bill that allowed for the sale of MMJ. Before patients needed to be enrolled in a university research program and receive their medicine from a hospital. Applications are currently circulating and are expected at the turn of the new year.

New York unsurprisingly saw the largest media storm in cannabis since Colorado’s Amendment 64 in 2013-14, when they passed and implemented their medical cannabis bill. Forty nine applicants vied for five licenses to cultivate and operate four dispensaries each across the Empire State. The high profile nature and large population of the state are now leading lawmakers to expand the allotment to 7 total licenses. Sale of medical cannabis is slated to begin as early as January 2016.

Delaware – The first state became the 20th state to decimalize cannabis back in June.

Massachusetts – After passing an MMJ law in 2012, the first dispensary of fifteen approved centers finally opened in June!

Pennsylvania – A resounding win in the senate lead to filibuster in the house. SB3 to legalize medical cannabis is sitting dormant awaiting a full house vote hopefully by the end of this year.

Reflecting on 2015 showed us that regulation writing and proper implementation of responsible programs are equally, if not more important than the legislative or ballot initiatives that created the programs themselves. As pattern shows us, the majority of initiative reform happens on big election years; state and federal, or every other year. 2016 brings us a presidential election, and cannabis reformation looks to benefit from historically exponentially higher voter turnout. Four states are highly likely to be voting on recreational initiatives. Nevada has already collected enough signatures to qualify for their ballot, with Massachusetts and Arizona close to collecting enough qualifying signatures. California also looks to be on the ballot in 2016. California was actually the first state to vote on recreational legalization in 2010 when Proposition 19 received 46.5% of the vote. Supporters claimed if Prop 19 would have been voted on during a presidential election year, it would’ve passed easily as a larger population of young voters turn out in these years. With that being said, 2016 could be a watershed year for cannabis reform.