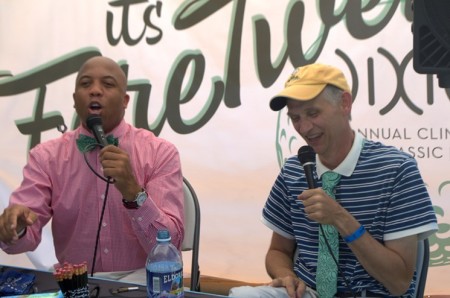 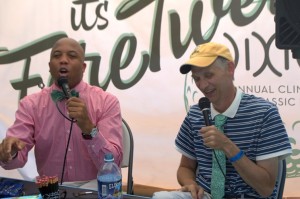 The bane of comedians, our Kryptonite, our silver bullet, is heckling. It ruins our sets. It ruins our shows. It ruins our nights. And not just for comedians, but also for audiences. Heckling is verbal graffiti. When someone heckles during my show, I think, ‘This is why we can’t have nice things.’ And then I crush that heckler without remorse.

So today I feel like a traitor, because today I am the heckler. Dixie Elixirs has asked me and my good buddy J. Marc Chambers to heckle golfers while they drive off the eighth tee in the Sixth Annual Clinic Charity Classic Golf Tournament at City Park golf course.

Golf tournaments are pretty high on the list of events you shouldn’t heckle. They’re right up there with baptisms, (‘I’ve seen better dunking in the WNBA!’), and trapeze acts, (‘Courtney Love has more balance than you!’) So J and I are feeling devilishly gleeful as we approach the gig. We know we shouldn’t be doing this and that’s why it’s so much damn fun.

I also have a bit of trepidation. It is a tournament, after all, and there will probably be golfers who are actually trying to win. It’s going to take a lot of nerve to heckle competitors with handy titanium comic-beaters in their hands. But then J tells me the majority of the golfers either work for dispensaries or the companies that service them, and the most likely consequence today will probably be a bad case of the giggles. Just like middle school, if we can get one person to snort something out their nose, then it will be a very successful morning.

Dixie has set up a lovely tent for us with a stunning view of the Denver skyline. We are sharing the tee area with Cannabis Camera’s Bud Booth, which is getting foursomes to take group photos with the great view in the background. Also in our tent are a few other Dixie people, Rebecca Maestas, Drew Ferguson, and Kevin Appleby. Rebecca is playing DJ, while Drew tries to get people to play Dixie’s ring toss game. Kevin is our secret weapon. A junior semi-pro golfer, his tee shots are staggering. So if anybody gets mad at our heckling, we can just have Kev hit a jaw-dropping tee shot for them*.

*Note to next year’s organizers: money-raising ideas. For a donation to MS, Kev hits your tee shot. Or, for a donation, we’ll shut up while you drive. Or, the others in your foursome can outbid you and we will seriously roast you. Oh, and hats. Golfers love hats.

At about 8:30 a.m., the tournament begins. I’ve been wondering what I’ll say to the golfers, but the first foursome is a gift from the comedy gods: one dude has a man-bun on his noggin, and another looks like Animal from the Muppets. (Insider’s tip: the worst insults have the most amount of truth in them.) The first golfer tees his ball, measures the wind, sets his stance, draws back, and I fire my first shot of the day: “The doctor who birthed me had a better backswing than you.”

Dixie at the Clinic Golf Challenge

As the day wears on, we discover that most people are there for a good time and actually love the heckling. That’s great, because J and I are having a ball. To an older golfer with a panama hat and a little white beard, I yell: “Just once, look back at me and say ‘welcome to Jurassic Park.” Another golfer I call a roided-out Steve Perry. Meanwhile, J taunts golfers with nursery rhymes about their greasy grannies with holes in their panties. To a stoner in jorts: “Are his shorts too long or his pants too short?” We know we’ve scored a hit when we can get teammates to laugh at each other.

At one point, Rebecca puts in a karaoke version of Car Wash by Rose Royce. Of course J and I know the entire song – the movie had cameos from Richard Pryor and George Carlin – so we proceed to jam it out for everybody. Next year, we will do more than one song. That was too fun.

There was so much else to talk about. The Clinic was a gracious host and had roving ambassadors with loose joints. I brought a bag of Oreo Thins, which did not last long. Winners of the ring toss got great Dixie Elixirs golf umbrellas or golf towels. But most of all, it was a beautiful day and we raised some money for MS. Who won the tournament? Who gives a crap? MS won the tournament, so we all won.

So now, the only question that remains is, who’s ready for us in next year’s tournament? We had a total blast, and I’ve thought of about a million things I could have said since then. Thank you to Dixie Elixirs and J. Marc for inviting me to this wonderful event.

My mother warned me about all of you.